Feed time is where you can see real focus and committment to the task. The objective is simple, “how can I  access as much feed as possible?”

The resource is limited and thus the benefits of competition far outweighs the benefits of collaboration. This can have drastic impact on the weaker members of any species. For example the lion cub has approximately a 40% chance of dying of starvation as the pride, having collaborated to catch the meat, then compete to eat it. There are exceptions such as the African Wild Dog who demonstrates superb collaboration, even at feed time. This pack work together to raise and feed the alpha pairs pups and will return to the den to regurgitate food for the pups who eat first then the yearlings and lastly those elders and more powerful in the pack. If a dog is injured it will still try and join the pack to hunt and if it cannot join in it does not go hungry as the pack will take meat to the ill and weak. Wow!

So back at Paddocks it is interesting to see how each animal ensures they get “lion’s share of the food” irrepective of the impact on their partners, young and community.

The Bull uses his weight to butt his cows away. The goats race to the food bucket and try and get their heads in before I spread it in the trough. The micro pigs run under the cows and sheep to gain the advantage in arriving first and two of them just stand near me and squeal and turn on any one else that comes near. The Zebu cow Chunky uses his increased weight to push his female partner away so he can eat his portion and then hers. So I have had to develop fairly intricate methods to reduce the bigger and stronger taking bigger shares. Admit I am not always a winner on this.

Took these shots of competition in action. 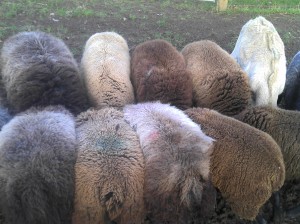